The other day in the playground, two children ages about six were fighting over a ball. The bigger one had it under his arm while the smaller one kicked, scratched and snatched at his clothing, his screams bouncing off the swings and slides.

The bigger one’s mother comes to mediate. She is Nigerian. She makes her son give his ball and tells him to share. Smaller boy runs off triumphant. After a while, bigger boy goes to retrieve his ball. Smaller boy starts with the scratching and kicking and screaming again. Smaller boy’s older brother intervenes, making him give back the ball. Smaller boy screams some more.

Bigger boy’s mother makes him share again and while we are all watching, smaller boy runs towards the fence and throws the ball into the road, laughing maniacally.

What do you think the best way to handle this would have been?

As I left the playground that same evening, a group of three Yoruba women are walking behind me (a bit of a non sequitur but they took over one part of the playground and whipped out puff puff, chin chin, meat pies…it was like a party. Very nice ladies. More on this later). One of their children kicked up a fuss about leaving, screaming every few steps and throwing his books on the ground. He was big too, around eight. The women ignored him. He got louder, ripping his shirt out of his trousers. The ignored him still. He threw an object at his mother’s feet.

His mother turned around and unleashed a stream of Yoruba at him. “Are you stupid?” she asked. The boy’s shoulders shook as he tried to contain himself. She said something else in Yoruba again. “Oya,” she said. “Hold your mouth.” The last I saw of them as they rounded the bend, the boy was holding his lips between an index finger and a thumb, sobbing.

Would you go for a more serious punishment if your child throws an object at you?

Another day at the GPs’ surgery, this mixed race kid – heavy kid, what Igbo people refer to as ‘O furu afu’ stomped about the whole place. His mother tried in vain to catching him as he raced in the corridors (forbidden) knocking on the offices (forbidden) and slamming the doors (forbidden). He pushed open the doors leading to the outside and escaped, and a black man who had been sitting quietly by the door gave chase. Almost instantly, the boy ran back in and the man followed, peeling the bark from a switch in his hand. He flexed it. The boy took two steps back.

“Sit down,” he said. The boy ran to his mother and sat down. When the man, his father, went to speak to the receptionists, the boy stood again and ran outside. His father walked out and the next thing we heard was ‘piam! piam!’ and wailing started up.

We went to see the doctor when it was our turn and on our way out, my son started running towards the doors. “Come back,” I said in Igbo. He stopped and turned around, waiting for me to catch up. “Stand here,” I said again in Igbo, as I reached for the hand sanitizer by the reception. He took a sidestep towards the door, and another, still watching me.

“Did you not hear your mother say you should wait here?” the man said in Igbo, presenting the switch. My son froze.

Would you let a stranger whip/punish your child?

Editing is hard, man. I don’t mean that I hate editing myself, on the contrary I might like it a bit too much. Well, maybe not like, but I keep wanting to change things until the entire thing is completely unrecognisable. I am just going to have to remember that people seemed to love the book when I blogged it last November/December and not change it too much.

On the plus side, I am more than halfway done and I find myself actively enjoying the dialogue of Paul-O and Lucy the most. That boy was supposed to be a very minor character. I’m still surprised at how he keeps showing up.

Remember, even if you read parts of the book when I blogged it, THERE IS A SURPRISE TWIST! Muhahahaha! I love twists. (Hopefully) you didn’t see this one coming. Till July peeps! I can’t wait!

I watched City of God for the second time yesterday and I cannot tell you how sad that film makes me. I just hope and pray that the only way for any of my descendants is up. I cannot bear the thought that someone descended from me will have the kind of life that the Runts had in that film. Nobody should have to live like that but that is the reality of the world I suppose. Things are hard in a lot of places. Even here in London, there are tower blocks and estates where the situation is no better; children living on their own because parents are druggies or work more than two jobs, hiding out form social services…stealing to get by, learning to kill to ‘get respect’ , a substitute for the love and care they are not getting at home.

This reminds me of rapper DMX’s ‘Intervention’ where he recalled that when he ran the streets and it was getting dark, the mothers of his friends would ‘whup their behindd’art, pull their ears for being out that late. There was no one who did the same for him, he says. Of course I am reluctant to put all the blame on his parents being a parent myself – I mean the guy is almost 50, take some responsibility for your life – but it’s easy to see how they can mess up a person’s life.

I will spank my children out of love.

It’s easy to get it so wrong though. Parents are human with their own worries, personalities and baggage. It’s easy to tip the scale from correcting a child to venting your frustrations. Before I had my son, I didn’t think twice about flogging or spanking a child. In fact, I will tell him something a few times and if he doesn’t listen, I’ll smack him. But then I read something a few months ago which made me feel like a monster. I believe the quote was something like ‘Children cannot fight back’. I wondered then, was I an abuser? I was flogged with a cane, slapped or spanked all my life as a means of discipline and correction but it wasn’t the nicest thing. Do I really want to do the same to my child? It especially hurt when I called my parents out on something they were doing which they’d told us not to. In those scenarios, spanking was supposed to discourage questioning or challenge to authority. I don’t think it was fair  but….that was society. You didn’t question elders. However, do I want to raise a child who is afraid to question, who – given his parents – is likely to grow up questioning EVERYTHING? 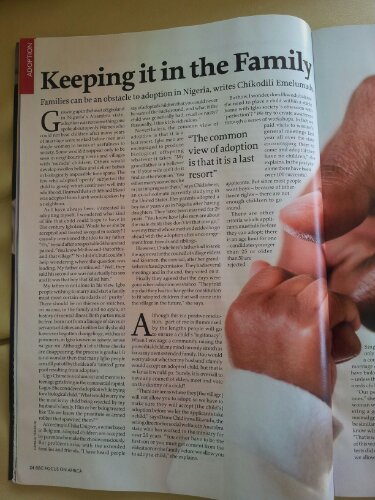 Thank you to everyone who helped me when I asked for comments on adoption in Igboland. The latest issue of BBC Focus on Africa Magazine is out now and you can find my article on page 24. For details of how to subscribe to this magazine (including back issues) click here. I cannot tell you how much I miss working with these dedicated people, bring us entertainment, information and good news from the African continent. Please subscribe. And you can follow the editor Nick Ericsson on twitter (@nickericsson).

That’s all for now. It’s back to work for me.

Since when do you let someone come in and take your crown from you? Granted it is the crown you bought with your daddy’s money, and you sort of created the position of queen and crowned yourself… sewed the robes…”

Here is a small selection of what people have been searching for in the past seven days (which led them to my blog). The number of times searched is in brackets.

How to love Igbo things (3) – Ezigbo nwa. Deeme. I hope you found what you were looking for on this blog. Nnoo. Welcome.

Altar of burnt offering in Igboland (2) – Maka why now? Mba nu, that is not my forte. You need to visit Ukpuru and maybe you’ll find some images from the past even if I haven’t seen that particular type myself. But if you’re looking for some Okija Shrine stuff, you’re in the wrong place.

How to say ‘I have cooked’/’I am cooking’ in Igbo (1 +1) –  Luckily for you, you don’t have to tell an Igbo man when you have cooked. The smell should do it for you. Igbo foods – when cooked properly – are very smelly and need no introduction. I’m assuming you’re not wasting your time and mine with any rice-based dishes because as any true Igbo man will tell you, rice is nni nnunu – only fit for birds. Yes, the smell thing works over the phone and the internet as well.

But if you must know the sentence, ‘I have cooked’ does not translate really because it’s what you should be doing as a woman in the first place. I am cooking is ‘Ana m esi nri’. The closest to ‘I have cooked’ is ‘Esichago m nri’ – I have finished cooking.

What is ‘behaviour’ in Igbo? (1) –  Omume. Good behaviour is ‘Ezigbo omume’ and Bad behaviour is ‘Ajo omume’. If you’re a woman, you must aim for ‘Ezigbo omume’ at all times, except if you’re married and it comes to …ahem! wifely duties, then it’s ‘Ajo omume’ all the way! But be careful. If you know too much ajo omume, your husband will ask how many people have seen your thighs before him. If you’re a man, the world is your oyster. Ajo omume and ezigbo omume are pretty much the same for you (except when it comes to murder and igwo nsi, juju and so forth).

What can I say to my Igbo boyfriend? (1) – Why say anything? I have discussed it at length on this blog. Why do you want to be talking uselessly like a woman who has no sense? Just close your mouth until he speaks to you first. Hia. Your boyfriend is IGBO. He is not a woman neither is he onye ocha. He does not need to have conversations with you. The only language he speaks is FOREX and you’re too dumb to speak that anyway. When you feel yourself wanting to start a conversation, ask yourself these questions:

If you answer ‘No’ to any, just mechie onu and sweep or something. Or go get a manicure. Or polish your Pyrex. Talk is what girlfriends are for.

I see female breast in my dreams (1) – Ewooooo! My brother/sister they have come for you. Yes, umu mami wata nke ndi bekee n’akpo SUCCUBUS. Your own has finished o. I cannot help you. You’d better go to your village and see your local Eze mmuo, find out how many chickens and goats and bottles of Seaman’s Schnapps you need to break the tie. It’s either you are married to one of these creatures in the underworld or else you are their lover or follower.

Wait…have you been watching any films featuring the above mentioned actress? There may be hope for you yet. It’s not your fault. Cossy’s assets are well-known and it’s possible they would dominate your dreams. Heck, they dominate more than half her own body. Say 5 Hail Marys and don’t do it again.

Or if you’re a fan of Big Brother Africa your brain could just be regurgitating the image of Prezzo’s man boobs. (I’m really, really sorry you all had to see that.) I bet you wish a succubus was after you now.